The innovation of Saint-Elme / Active2D lightning conductor comes from the use of a second integrated sensor which measures the intensity of the electric discharge current, which is formed on the lighting conductors head.


A first device, named Impulse device stores the electrostatic energy present in the atmosphere at the approach of a stormy cloud and releases the excitation of the ascending discharge at the right time.

A second device, named Power device, collects and stores the wind and / or the solar energy in several strong power capacitors. The Saint Elmo lightning conductor is in this way permanently pre-loaded of an important energy which enables him to support the propagation of the ascendant tracer.

Close to the storm activity, an integrated sensor measuring the surrounding electric field value, releases the impulse device like most of usual Early Streamer Emission systems. Those lightning conductors almost immediately reverse the polarity of their head, creating a sudden amplification of the electrical field.

The innovation of Saint Elmo Active2D lightning conductor comes from the use of a second integrated sensor which measures the intensity of the electric discharge current, which is formed on the lightning conductor's head. When the downward leader enters in the protection area of the lightning conductor, the measured current strongly increases. As soon as this current is higher than the characteristic threshold, the power capacitors discharge and release the necessary energy for the propagation of the leader.

In this last device, the lightning conductor's head acts as a capture device. Therefore, the head is electrically insulated from the ground. 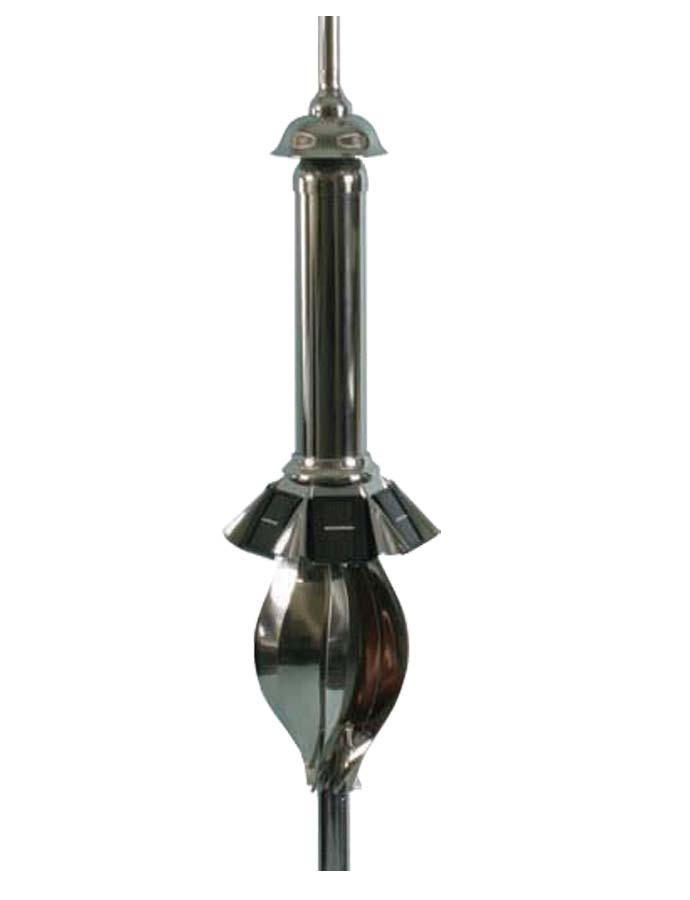 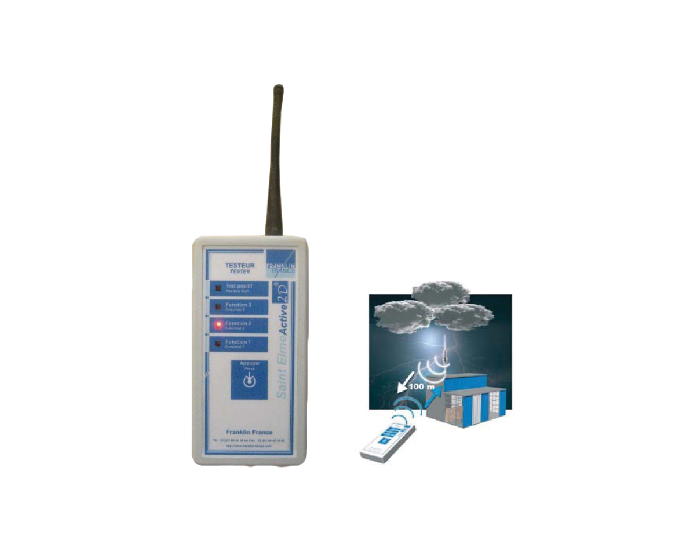 The Saint-Elme Active 2D lightning conductor can be tested on site, with is remote control tester (initial checking, periodic checking in compliance with the NFC 17-102 and decrees in force, maintenance, ...)

Active 2D remote control tester use the communication by Radio waves, and create any electromagnetic perturbation. 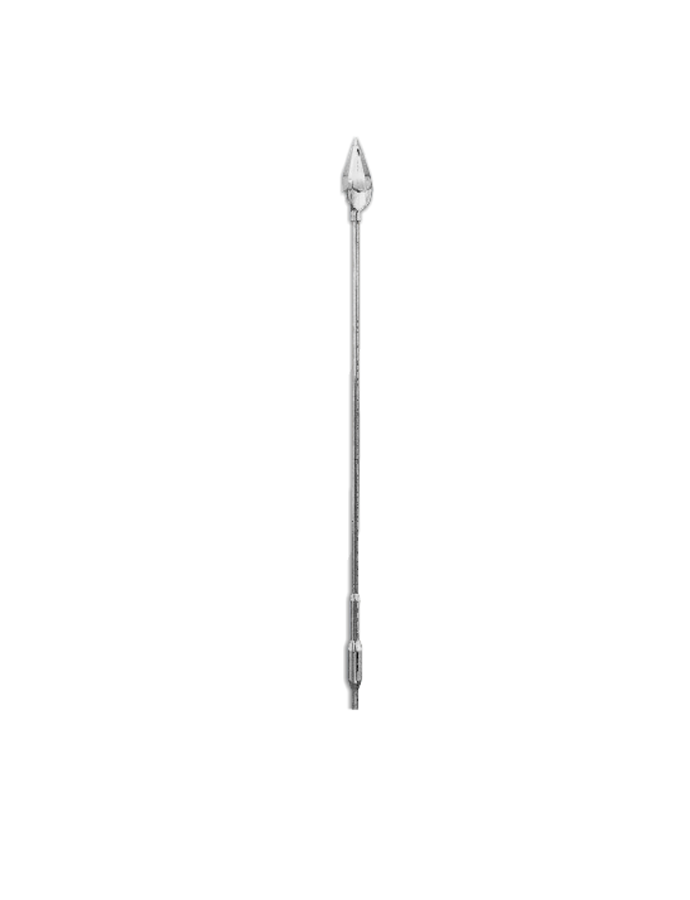 The operating principle of the Saint-Elme® lightning conductor is to create free charges (ionized particles and electrons) in the air surrounding the lightning conductor and to create, within a cloud - ground electric field, a channel of high relative conductivity constituting a preferential path for lightning.

Free charges are created by the corona effect by applying on the Saint-Elme® lightning conductor's ionized point(s) the voltage supplied by cells of piezo-electric ceramics (lead zirco - titanate), their feature is to produce a very high voltage by simply modifying the applied pressure. 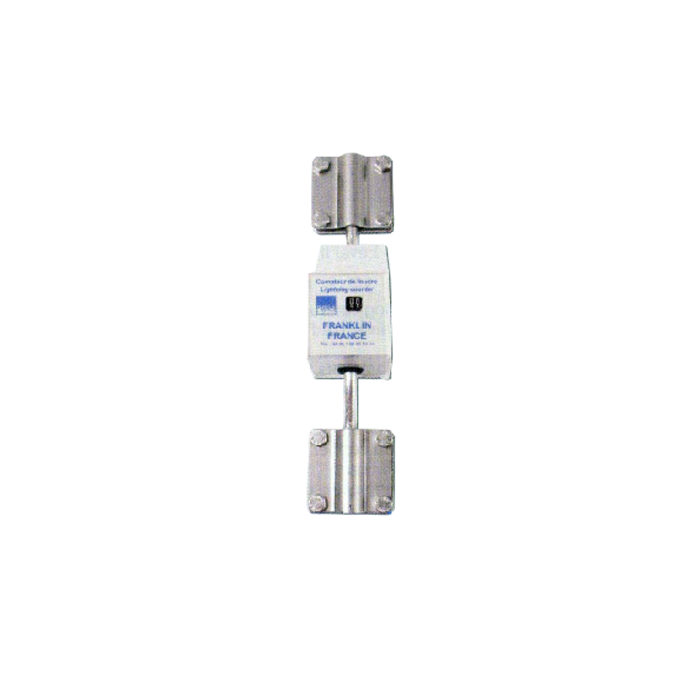 The impact controller or lightning counter is designed for detecting and counting lightning strikes received by structures with lightning conductor. It is fitted in general to a down conductor.

The information received by the controller can be used for spesific maintenance of the equipment.It is totally autonomous and does not require ant external power supply. It is delivered with 2 collars AFJ0819RL.

Counter compulsory for protected sites (Decree of the 28 of January of 1993), recommended for expertise and insurance companies. 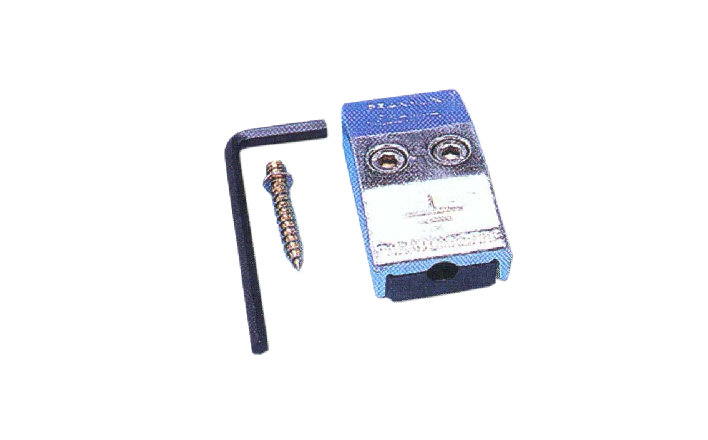 NF C 17-100 and NFC 17-102 standards:
A control junction must be inserted on each down conductor to allow disconnection from its earth terminal. The 2F control junction, featuring very low impedance and perfect conductivity, is designed for easy installation and inspection 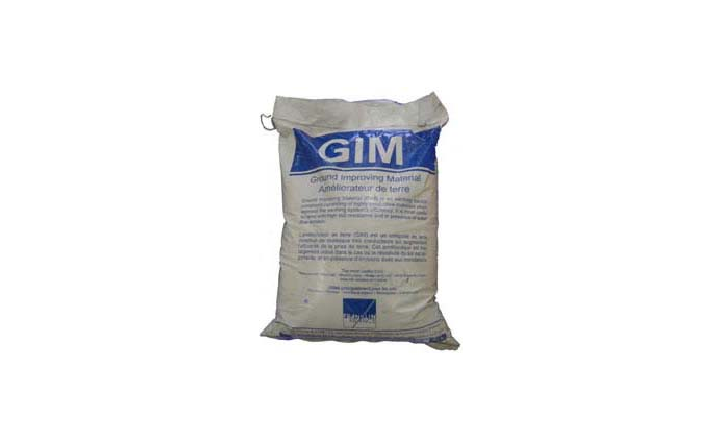 GIM Ground Improving Material is an earthing backfill compound consisting of highly conductive materials, which increase the earthing system's efficiency .It is most useful for area with high soil resistance and also when the probability of erosion due to the flow of water exists.

Message: fwrite(): write of 34 bytes failed with errno=28 No space left on device