The Active 1D excitation advance is obtained by device named, "impulse device". Its principle consists in storing electrostatic energy present in the Atmosphere at stormy cloud approach, to release the ascending discharge excitation in good time. 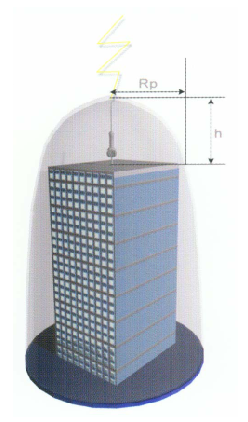 The ability to promote excitation at lower values of the electrostatic field (hence earlier) enhances the capture probability of lightning conductors. This capacity gives them greater efficiency in the role of "preferential capture points" compared to any other point of the building they protect. Therefore these lightning conductors offer superior guarantees during low intensity discharges (2 to 5 KA) compared with simple rod type lightning conductors, which can only intercept them over short distances { D = 1012/3, where D is in meters, I in KA }.

The zones of protection of lightning conductors are obtained theoretically by plotting the electro geometric model, but are comparable in practice, for low heights, to a cone of revolution which apex is the tip of the lightning conductor.

French standard NFC 17-102 deals with early streamer emission (ESE) lightning conductors, and takes into account the levels of protection Np of varying severity (I to III), to be determined previously by an assessment of the lightning risk for each project.

The table hereunder gives the Rp (rn) values for the four levels of protection Np depending on the actual height h(m) of the lightning conductor in relation to the different planes considered. 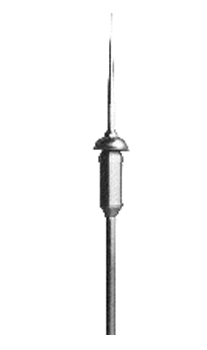 The Active 1D excitation advance is obtained by a device named, " impulse device ". Its principle consists in storing electrostatic energy present in the Atmosphere at a stormy cloud approach, to release the ascending discharge excitation in good time. This device operates at a stormy activity approach by an integrated sensor which measures the surrounding electrical field value. It provokes then a polarity inversion of the lightning conductor head, creating a sudden amplification of the electrical field on its tip.